Job Fairs – Your Attitude and Approach to the Fair 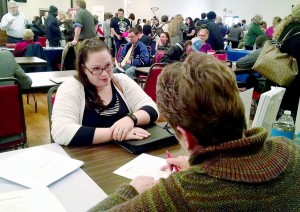 The job fair is one great way to network and find a job. But, there is more competition at the fairs than there was in the last few years, due primarily to the large number of company layoffs and fewer open positions. Your attitude and approach to the fair may make a huge difference in getting beyond handing over a resume to a recruiter or company representative

JOB FAIRS AREN’T WHAT THEY USED TO BE

Joe received his layoff notice on Friday. He knew that he should start sending his resume out right away, but he was not in any particular rush, he needed a few days off. After a week at home, Joe saw an announcement in the Sunday paper that a technical job fair was to be held in his area next week the following Tuesday.

This was great news. Attending a job fair was how Joe had gotten his last job. He noted the starting time was 10:00 am. He’d get there early and be among the first people there.

Armed with a few copies of his resume, Joe arrived at the site of the job fair right on schedule. But, as he drove past the site, he could not believe his eyes, and was completely shaken to see a line up of people all the way around the side of the building. He’d been hearing about company layoffs and more people out of work, but somehow he never connected that information with what he was seeing.

After a half hour of waiting Joe was inside, and began to walk around. There were less recruiters than at the last job fair, and a lot fewer listings. Joe moved around the room, but didn’t seem to be able to make any headway. .Discouraged he left after only giving a couple of recruiters his resume. The reaction to his resume had been different as well. Three years ago they were begging for this resume, this time it was being placed in a pile with the others.

Being a relentless type of person, Joe went home and though about his experience. What had worked and what had gone wrong? He began to strategize a plan for his next job fair venture.

Joe’s new plan included some very basic steps that would make a difference. He’s passing his suggestions on to you.

1. Check websites to see announcements of local job fairs. They will give you dates, locations, websites, directions, and contact information.

2. Check out which companies will be attending the job fair. Select those that are of interest to you and visit their website. What do you see that fits your qualifications?
3. Time is of the essence. Lay out a plan to move quickly around the site, making sure you contact those of particular interest.

4. Make sure your resume is in-line with what they are seeking – is it clearly stated?

5. Take several copies of your resume with you to the job fair.

6. Dress professionally, and in accordance with the job you are seeking. A non-management job does not require a suit, unless it is a particularly traditional or conservative company.

7. Plan to arrive early – at least a half hour prior to the starting time.

8. Upon arrival at the site, get a floor plan map – usually given at the entrance or information table. Or, better yet, there may be computers there for your use to look up participant’s locations and more company information.

9. Time is of the essence. Lay out a plan to move quickly around the site, making sure you contact those of particular interest. Visit the sites that have the fewest visitors, even though they would not be your first choice. Keep your focus and make contact with as many companies of interest as possible.

10. Be enthusiastic, upbeat, and above all, be prepared to tell them what you are looking for, and what you have to offer.

Even though Joe was discouraged by his first experience, he persisted and attended another job fair one month later. This time he followed his own advice and did some preparation up front. His research and planning paid off. He was able to make several meaningful contacts, and as a result got appointments for three interviews. Out of the three interviews he received one offer. He is waiting to hear from the other companies before he accepts. If you asked Joe what made the difference, he would answer, “Having a game plan and being focused and prepared. I felt more confident about presenting what I had to offer”